A Romance of Many Dimensions

Sid Motion Gallery is pleased to present a group exhibition ‘A Romance of Many Dimensions’ including new works by Matthew Barnes, Hannah Hughes and Abigail Hunt.

The exhibition’s title is taken from Edwin A. Abbott’s ‘Flatland: A Romance of Many Dimensions’, a satirical Victorian novella set in a two-dimensional realm. The works in the exhibition play across 2-dimensional and 3-dimensional space and the tensions that are created by shifting between the flat and the sculptural; the photographic and the tangible; the man-made and the organic; the found and the constructed. 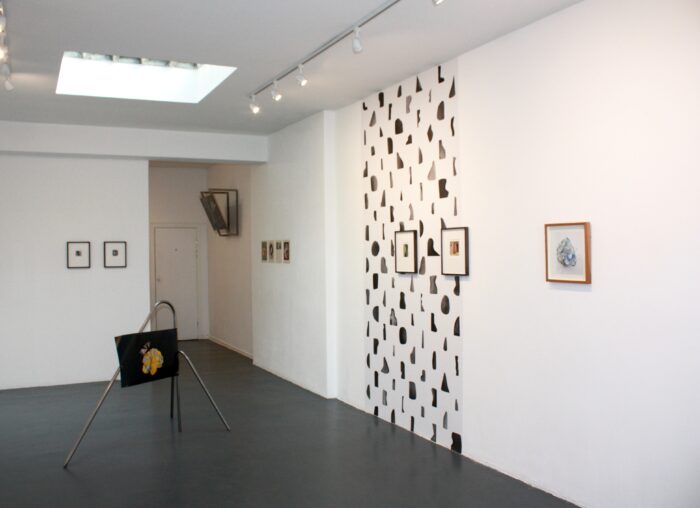 Matthew Barnes uses sculpture and photography to investigate the spaces we occupy and how we engage with our built environments. As well as reconfiguring existing sculptural forms of new and old infrastructure witnessed on his travels, his work reconsiders how we pass through space and how structures can develop in the modern world, as well as push boundaries of the medium that portrays them.

In Hannah Hughes’s collages, each fragment of colour and shape comes from found photographic images and brings with it illusions of depth, shade and tone. The found photographic cut outs are from the negative shapes of figures in advertising imagery and magazines which create speculative forms, situated somewhere between reproduced images and the physical world. The shapes undergo a long process of configuration and re-assembly, teetering on the edge of abstraction and representation, between digital space and painting – allowing their abstraction to develop their own sense of presence and internal logic.

Abigail Hunt’s works are based on a procession of tasks: the investigative research of an image, the deconstruction of a line, the disablement of form and finally the reconstruction and reconfiguration of the object. Placing, replacing and reconsidering, she explores abstracted arrangements and re-appropriated imagery. Describing her practice as sculpture, she is interested in a consideration of the plane and the drawn or cut line of the work, as well as in the suggested, yet actually imaginary, representation of form and a perceived depth of field.

Matthew Barnes (b. 1986) studied at Edinburgh College of Art, graduating in 2008. He currently lives and works in Glasgow. His recent exhibitions include: ‘We Disappear’ with Jonny Lyons, part Glasgow International, GPS, 2018; ‘Crane and Gable’, Govan Project Space, Glasgow, 2017; ‘Bad Idea’,  249 Govan Road, Glasgow, 2016 and Adamastor Studios. Lisbon, 2015. ‘Bad Idea’ will also be presented in Athens (forthcoming in 2018) and at The Chopping Block Gallery, London, 2019. Between 2006 and 2014, Barnes exhibited extensively in Edinburgh – including as part of the Edinburgh Art Festival, Finland, Bristol and Manchester.

Hannah Hughes (b. 1975) graduated from the University of Brighton in 1997. She has exhibited in the UK and internationally and her work has been included in the exhibitions: ‘Shapely’, CSA Space, (2011); ‘In The Future We Will All Be Modern’, Arcadia Missa, London (2014); ‘A5’, LUBOMIROV EASTON/ Platform Projects at Art Athina in Athens (2014 & 2015); ‘Where One Form Began Another Ended’, The Bakery Gallery, Vancouver (2016); and ‘These Fingers Read Sideways’, Fettes College, Edinburgh, (2018). Her work was recently on view in the group exhibition ‘Concealer’ at Copeland Gallery, London as part of the 2018 Peckham 24 Festival, curated by Tom Lovelace; and ‘The Momentum’ at Angus-Hughes Gallery, London, curated by Saturation Point in 2018. She was a co-founder of the artist-run project The Drawing Salon with artist Jill Henderson, a programme of events based in Canada, which took place at the Western Front, Malaspina Printmakers, and VIVO Media Arts Centre, Vancouver BC from 2011-2012. Hannah has been an artist tutor with the Cubitt Education program, Cubitt Gallery, London. She lives and works in London. Her work is included in an experimental publication curated by Rodrigo Orrantia titled Material Immaterial launching in July 2018.

Abigail Hunt (b. 1978) has shown at 5 Years, Whitechapel Art Gallery, Camden Arts Centre, Platform for Art, London Underground and EAST International and has written extensive publications for gallery clients, including Tate and Whitechapel exploring interpretations of contemporary art. In addition, her separate collaborative practice with artist Kieren Reed involves a direct interaction with audiences within manufactured and suggested situations. They have worked on commissions for the Herbert Read Gallery, Tate Britain, IKON Gallery and The New Art Gallery Walsall. They have shown work internationally and in the UK, including exhibitions at Studio Voltaire and Gasworks as well as live performance works for Cubitt and the Folkestone Triennial.